It was Dr. Seuss who best described the “Waiting Place”- a place where people are stuck in a place, at a crossroads, where they are not sure what their next move will be.  Perhaps in his book, Oh the Places You’ll Go!, Dr. Seuss does an excellent job at describing the adult experience in a language that even the youngest preschooler can understand.  He warned us, didn’t he?  It was here that he told us of the exciting, yet frustrating adventure that adulthood is.   Although this book is meant to be an encouraging send off into adulthood for those on its cusp, it also serves a harsh dose of reality.  Dr. Seuss, also known personally as Theodor Geisel, was in the December of his life when he wrote and published this masterpiece, and he knew a thing or two about what life had to offer.  He would then die a year after it was released.  What a symbolic gift!

Now on to what the title says:  Feeling stuck.  I know,I know I have written much about feeling out of place or that there never seems to be enough time in a day.  Maybe you are thinking “Shit, here we go again!  Another one of Robin’s griping sessions about motherhood and her life and blah blah blah.  We get it, parenting is hard!  Get over it!”  However, friends, fear not.  I do not want to annoy you with the little annoyances that surround me each day.  Instead I felt moved to talk about another thing that has recently become very personal to me: my writing.  There was a time when I had stopped writing for a long time.  I just didn’t feel very inspired anymore as I became busy with school .  By the time I had completed assignments, I didn’t want to write anything else.   The same was true for reading.  And so I went years and years without writing a single thing that wasn’t related to some kind of academia.   And then the real world happened.  I got married and had children.  Found work and joined the Army family.  And all along, I still maintained that nothing inspired me.  And then suddenly, it hit me.  And not just one source of inspiration.  Oh no!  It seemed that years of pent up stories finally found their muse within all the experiences I had had or was  having at the time.  And instead of having one idea,  I got several, simultaneously it seemed!   As much of a blessing as it has been, it has also left me in that useless place that Seuss describes:

You can get so confused

that you’ll start into race

down a long wiggled roads at a break-necking pace

and grind on for miles across weirdish wild space,

headed, I fear, toward a most useless place.

Now I know you might want to ask “Robin, how in the world does having multiple sources of writing material translate into waiting?”  I know it sounds crazy, but hear me out, friend.  In the last year, I have created four different characters who were supposed to be the protagonists in each of their own individual literacy pieces.  As crazy as it sounds, these women have become very real to me to the point where I refer to them as real-life references for things or experiences that either me or a friend has experienced/is experiencing.  Here’s an example:  My first DearHeart is a young maiden named “Josephine” or “Jo” for short.  Jo is a dancer with a really bad speech history and has been able to figure out how to use her talent to compensate for her stuttering difficulties.  She does so successfully, until she is unable to dance due to an injury.  Instead of dealing with an injury the way most well-adjusted people try to do, she regresses back to her stuttering and is unable to deal with the day to day “reminders” of her passion, choosing instead to run back to her parent’s house and hide.   I know I know, very immature.  Very childish.  Very cowardly.  So because Jo is like a dear, dear friend to me, I often refer to instances when someone might be acting childish or might be acting like a hot mess, I might say something like “don’t be so Josephine about it!”  In fact, these friends of mine even have their own playlists in on my Spotify account.  That’s how real they’ve become.  Yes, friends, you are read correctly.   You now know that about me. you can’t un-know that.  I guess that means we are best friends now.  And I thank you again for your complete understanding and lack of judgement.

I feel that I might have gotten off course here.  I tend to do that, you know.   And I think that is where my stuck feeling has materialized.    Because I have these friends and their various personalities, personal stories and journeys. some finished, some half-finished, and some not even started. I have created a type of ditch for myself in which Jo, Hannah, Collyns, and Elle are constantly pitching new ideas at me, whether it comes in a dream (corny, I know!) or while reading, or during a run, or even while sitting at my desk running financial reports for work.   It is in this ditch, or waiting place, that I get overwhelmed with storylines, constantly changing or swapping details or themes that I think might make a classic page-turner one day.  And then the self-doubt sets in.  The worry about the lack of time, the overabundance of ideas and alongside of the plethora of inspiration sits the constant disorganization of said ideas.  “What exactly should I write about?  Oh well that idea isn’t going to work!  That has been done before!  Should I borrow from something I like or do something more original?  Dammit, your friends deserve their books… give them their books!”  I have been moved in so many different directions, I feel like the Magic freakin’ School Bus.  But instead of feeling “magical” I feel more and more frustrated.  I’ve never been good at waiting.

I found myself this past Sunday night confessing all of this to my husband, to which he safely replies: “That’s no good.” (I find that when most husbands either aren’t listening or don’t really know what to say, this might be the best response.  It’s far better than just “mhmm-ing”)  I lay in bed thinking, almost obsessing, over my inability to figure out my next move.  Surely, these characters cannot go to waste.  That would be a sin!  But how could I possibly configure them into something productive… something I could use to move people, to inspire people?  I hate this feeling!  I really should’ve been happy that my Birds had just won the division title, despite gaining a huge loss by the injury of our QB (that’s another blog post, friends, for another day).   But instead I lay confused, lost, agitated that here I was, yet again.  I had finally answered the calling to go back to writing, been blessed by inspiration, and had cranked out a couple decent pieces within the span of a year’s time.  Not to mention, my occasional posts on this here blog.  But despite all of that, I feel stuck.  Waiting in a place where I don’t really know what direction in which I should go.

And then I remembered Mr. Geisel.  He ends his compendium with “Your mountain is waiting, so get on your way!”  Mountain!  Wait a minute!  Hadn’t Lin-Manuel Miranda just compare where he was in 2014 to the feeling of going up something  in that dag-gone PBS documentary I had just watched earlier that evening.  (Dammit, Alexander, you just have to meddle your way into every post I write, don’t you!  You charismatic son of a bitch…er whore, you!- by the way, that’s not my wording. so don’t blame me for calling someone’s momma a whore! Wait, where was I?)  In this documentary, Lin describes the phase at that time synonymous to climbing up something.   He, too, was in a waiting place.  He had said that everything in his life is under construction.   His house had totally been gutting and was  being renovated, and his show was about to begin auditions.  In fact, I believe there were still some things here and there that needed tweaking.  He didn’t fear though and what came out of it?  Only, oh I don’t know, the best-selling, most successful, most award-winning musical of our generation!  No minor feat for someone who just 6 or 7 years ago, had no idea what this idea would turn into or how he’d even blend founding father with hip-hop.  He just wanted something to read on vacation.  Now I could never be a Linnie Mans, but I’d like to think that perhaps just as he found his way out of a profusion of ideas and was able to narrow them into a singular notion that worked oh so well, maybe I, too, might reach the top of my mountain. 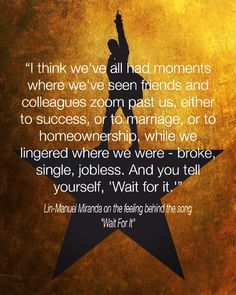 When putting this all into perspective, perhaps the Waiting Place isn’t so bad.  Perhaps, it might even be a blessing.  It is in this “useless place” that I hope to, in fact, be the most useful; maybe reading lots and lots of books could fill this supposed void. (I will have my wall full of books… I wonder if Santa got my list yet?)  I have challenged myself to not obsess over my girls, although they still like to come out and bug me from time to time (especially that Jo; she really is the hottest mess!)  I still quietly remind myself that at the moment, more than likely when I least expect it,  “[will] come to me, like an Epiphany” (said in my best Chrisette Michele voice).  I just have to endure the Waiting Place.   I have seen my mountain.  It is there.  I just need to find the right shoes to hike it.  Besides, good things come to those who wait.  Just ask Mr. Miranda!