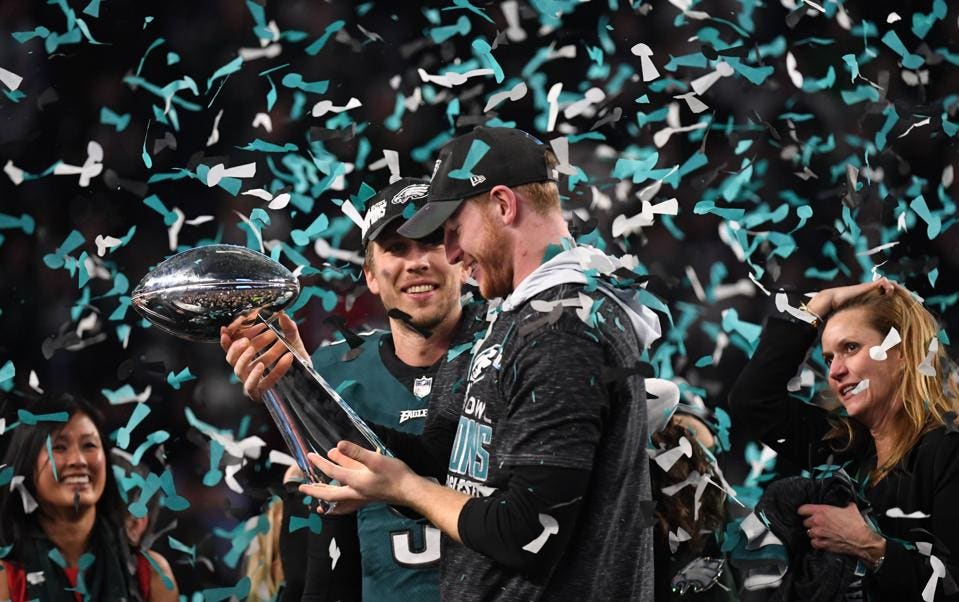 From Wentz we came… In Foles, we trusted!

February 4, 2018.   A day that will forever live on in Philadelphia history.  On this day, my beloved Philadelphia Eagles claimed the franchise’s very first Lombardi Trophy symbolic of their Super Bowl victory.   I watched the game, nerves wrecked and acrylic paint chipping off my fingernails.  I paced my den around and around in circles, trying to find “something to do” in an effort to take my mind off the nervousness I was feeling.  At one point, I had to walk away because my nerves were so bad.  But as I said in the beginning of the season, this was our year.  This was our time.  And we did it!  Through all the negativity thrown our way.  Through all the doubt thrown our way.  Through all the pain and obstacles and injuries thrown our way.  Just when all hope might have been lost on all who are not true Philadelphia fans, somehow, someway we overcame it all!  The Eagles emerged victorious this night.  And even though I did my best to stay strong, I found myself like many Eagles fans, surrendering to tears of joy.

But somehow, it all feels so surreal to me still.  It has been such an emotional journey for this team, for this franchise, for this city.  For so long, I, like many other fans, have waited for a moment like this.  A moment in which we can say that we are the champions!  Now, I know some of you might be from a city whose team has yet to see a championship parade march down Main Street.  You might be saying… “Robin, your Phillies just won one ten years back!  Take it easy.”  True, the Phillies brought our city its first championship in 25 years.   But regardless of the four main sports who take their name from the City of Brotherly Love, there is something special about the Philadelphia Eagles.  Every Eagles fan has their reasons.  But for me, there is a special history about the Birds.  A history that finds itself coming into the family room of the house in which I grew up.  A history in which I’d watch Birds games with my Dad… a man who was passionate about his sports… so much so that if the Birds didn’t win, he wouldn’t speak to anyone for most of the day.  A man who found himself yelling at Buddy Ryan, Rich Kotite, or Ray Rhodes or at any of the players who failed to make a play he knew they should’ve made.   Spending these Sundays with my Pops helped solidify my love for sports, my passion for the game of football, and my loyalty to the Birds.  I looked to my father to better understand this team when they were just not all that great.  I looked to my father to be patient with a team that no matter how talented its players were just couldn’t bring home a championship.  I looked to my father to stay faithful to a team at a time when the Dallas Cowboys were so popular that even my contemporaries at my small Catholic school pledged their loyalty to our hated rivals.   I had to stay strong.  I had to remain a dutiful and steadfast fan, despite what was popular… despite what was easy.

So this past Sunday means more to me than I can even put into words, although I’ve made the attempt.  This team… there is something so special about this team.  And I knew that it was this group of men, all from different backgrounds, and most of whom were rejected from former teams or even undrafted, who were destined to do what was deemed impossible by most of the National Football League and its pundits.   It’s a story of men who represented to the fullest what their adoptive city is all about.  As fans, we see ourselves in this team… we see ourselves in their story.   Fans like the D’Ambrosio’s who always welcomed us into their pizzeria every Sunday.  Fans like Kid Philly, who despite freezing temperatures, got up at 5 am and right in the middle of Broad Street created hype videos every week, encouraging fans to be and stay encouraged for the success the Eagles continued to have week after week.   Fans like my Dad, who, if he wasn’t sporting a Yankees cap, sported an Eagles cap both inside and outside the house.  Who’d spend every waking minute in the car listening to, and arguing with, 610 WIP sports radio about the Birds.  I see my father in this team.  The hard work, the sacrifice, the disrespect, and the passion.  When my Eagles… my Birds… claimed that trophy on February 4, 2018, they did it for Robert Barnett, Jr., and all the other die hard and loyal fans who left us before they were ever able see that Lombardi makes its way down Broad Street.  I will forever remember that night, that moment, when the Eagles rose from the ashes, and brought a championship back to Philadelphia… where it belongs!  I only wish I could’ve shared this moment, and a Miller Lite, with him.

Cheers, Dad, we finally did it!

He’s got some dope videos about the Birds as well as some other cool projects he’s been working on.  He’s a veteran too, so go on and show the man some love.  Tell him your girl Robin sent you!