Where in the World/in Time is Carmen Sandiego is perhaps one of my most favorite childhood shows.   Hosted by the late Lynn Thigpen, a boss in her own right, Carmen Sandiego invited kids enrolled at New York City public schools to join A.C.M.E, an organization dedicated to fighting crime, especially those that threaten geographical, cultural, and historical significance, as detective recruits, or gumshoes.  Its main nemesis,  Carmen Sandiego, was a former agent, one of the best, who betrayed A.C.M.E. and formed her own agency V.I.L.E. (Villian’s International League of Evil).  As the head of this organization, Carmen spearheaded the gutsiest thefts known, including depleting all the salt from the Dead Sea, embezzling Havana’s best cigars, swiping the strait of Magellan, confiscating the snow from atop Mt. Fuji, and stealing the Nairobi International Airport.  Y’all, she is so badass, she straight up stole an entire airport… like… that’s tight!

But I’m not here to go on and on about how great the show was.  The show was awesome and often I wished that I could’ve been on it.  I promise you guys, I would’ve crushed it!  But the biggest reason why I loved the show was because of the villain!!!  (GASP)  I know, I know, don’t you all come at me at once.  I am definitely a protagonist kind of girl.  I’m not really into villains unless they have a story that is like… “wow, ok like maybe he has a reason to be all in his feelings… maybe, he just needs some love or affection.”  I’m looking at you,  Eric Kilmonger and Loki.  But Carmen is a true badass and despite all the shenanigans she caused, she schooled as well.  In fact, I found myself often rooting for her escape.  Here are some of the things Carmen taught us.

Geography and history ARE cool. Too many times do people argue “Well, what’s in the past needs to stay in the past.”  And let’s be honest, most Americans are only concerned with what happens here.  They fail to see that there is an entire world out there… and that it does not revolve around us.  According to a National Geographic survey, only one in four people could correctly locate the Soviet Union or the Pacific Ocean on a map… 1 in 4!!!!  Like, the Pacific Ocean takes up a bunch of the world map!!! How can you not know where that is?!  Because Carmen stole the entire island of Bali, the gumshoes had to be knowledgeable about its history, its people and their culture, its indigenous animals and plant life, its climate, and its precise location to successfully locate it and return it to its proper location.  And so her crimes helped reinforce a love for learning and a thirst for knowledge.  Education for the win! 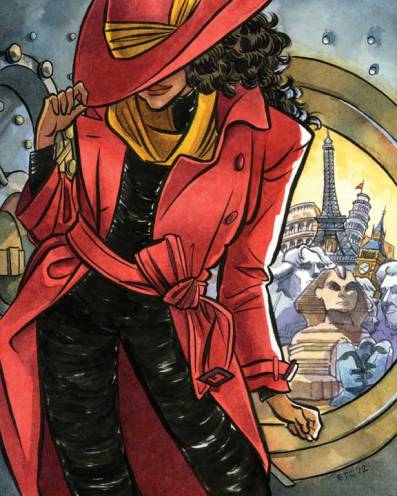 You don’t have to have a Y chromosome to be a boss!  Carmen was both a woman and a minority with her own business and a whole lot of power.  Her concept was developed in the mid to late-80’s when women were beginning to flood the workplace.  We saw more women working in business-related fields than in any other time in history.  And for possibly the first time, women were bosses… they were in positions of power.  Carmen was a pioneer who reflected the times in which he lived.  She was the CEO of her own organization, V.I.L.E, running the company like a well-oiled machine.  She was an inspiration to girls like me, teaching us that our gender could no longer limit what we could do.  We could have a successful career and be good at what we do.  And even though Carmen might have been engaged in some illegal shit, she still always kept her composure and ensured she recruited a slew of thieves who all had very different and special talents specific to whatever task was at hand.  She was the first character who was both a woman and of Hispanic ethnicity to prove that the woman didn’t always have to be on the “good” side.  She was no silly side-kick, either.  And she wasn’t working for “truth, justice, or the American way.”  And she was not ever in service to any man.  She wasn’t there to take care of the boss, she WAS the boss.  Carmen overcame the obstacles that as minority women, we are often assigned to at birth.  Her thefts allowed her to take hold of different cultures and customs, ensuring her a certain social hierarchy that would’ve been denied her by way of her own culture and gender.

Whatever you do, do it with style.  We all have jobs to do.  Some jobs require us to dress in a particular way, while others provide the freedom of expression most of us crave.  Carmen’s signature red hat, red trench coat and black gloves became symbolic of the grace she exhibited while pulling off some of the world’s grandest heists.   She kept herself clean and well-kept, even though her job was anything but.  She carried herself with a poise that made her stunning, all without being too revealing, as most female characters were designed to look (yes, even cartoon characters).  Most of the time, women in the media are given attention primarily for their looks and how they dress.  Yet Carmen carefully dressed in such as way that covered most of her face, save the sly smile and maybe a hint of one eye and covered most of her body.  At last, this powerful female character could be admired for her skills and her brains, instead of how she looked and what she could do for someone else.  Carmen proved that you don’t have to look like a sex symbol to be sexy and powerful.

You don’t have to stay where you are planted.  We are all born into situations over which we have no control.  But there are choices that we can make that can drastically change whatever might have been destined if our origins were the be all and end all.  Carmen was the best at what she did, despite her humble beginnings as an orphan  And she became the best by education, dedication, and determination.  She was the best.  Not just for a woman, not just for a Latina. She was just the best.  Period.  Amen.  Carmen  was a trailblazer, whose actions inspired a generation of people to appreciate our world and all the amazing (and not so amazing) things about it, both past and present.  She changed the game (both literally and figuratively) proving that women could be smart, sexy, successful, and didn’t need to be attached to a man to be so.

And so, Carmen Sandiego, I salute you!